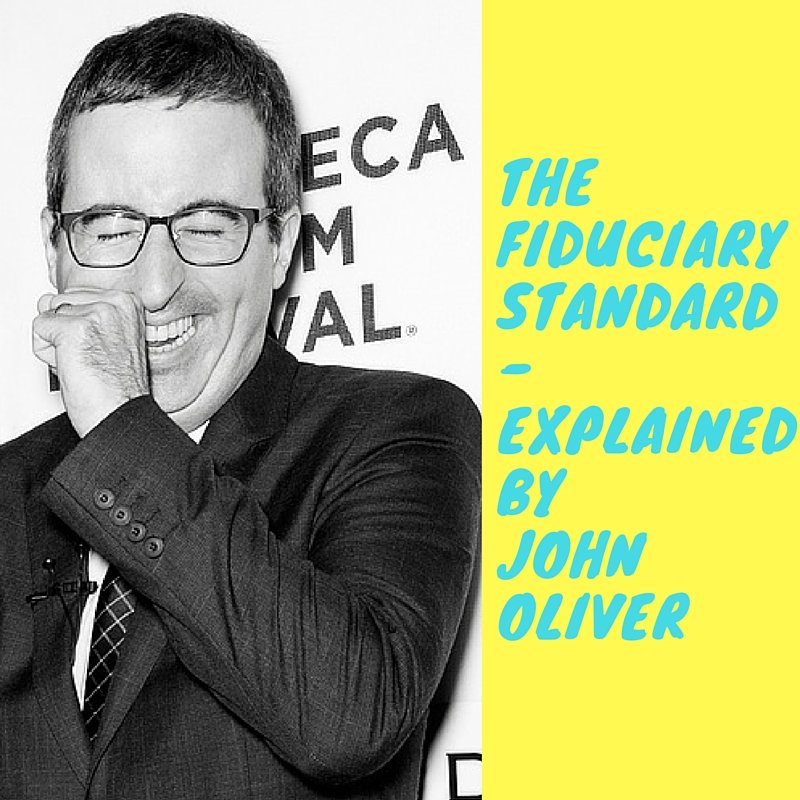 I’ve wanted to talk about the “fiduciary standard” and the new Department of Labor rules for months, but haven’t been able to articulate my feelings in an entertaining way. The legal-eeze of the new rules aren’t easily digestible for the average investor. In fact, most investors don’t even know how their advisor is compensated, or that the investment industry has varying standards of care.

That’s why when I heard the newest episode on Last Week Tonight on YouTube, I dropped everything…..

……I pushed back new content and made this my new topic for podcast episode 20. John Oliver was able to say everything I have been wanting to say on the podcast since the beginning, and he did the impossible,

If you follow financial personalities on twitter, you already know about the episode and that it went viral. I wanted to piggyback on John’s work, and share it with our audience to reinforce the importance of John’s message.

This is super-important stuff for anyone that plans on retiring in the next several years, so let’s dive right in… Take it away John…

“There is something you should know about financial advisors, even their name means less than you might think. The Financial Industry Regulatory Authority warns customers to “be aware” that Financial Analyst, Financial Adviser, Financial Consultant, Financial Planner, Investment Consultant, or Wealth Manager are generic terms or job titles and may be used by investment professionals who may not hold any specific credential. So, “Financial Analyst” is just a fancy term that doesn’t actually mean anything.”

Think of them as the “designer handbag” you found on Amazon for $39.99, they are supposed to look real, but aren’t.

The real designations they are trying to imitate are titles like CFP® or CFA, very real titles that actually mean something.

They actually mean something because they are incredibly difficult to get!

CFP® (Certified Financial Planner) is a designation that I have. The prerequisites are a four-year college degree, three years of client work, passing six financial planning-specific courses, and passing a ten-hour comprehensive exam. The CFP® designation takes three years of studying for most financial planners, no small task.  The pass rate for the comprehensive exam was about 60% in 2013, compared to the Multi-State Bar Exam, at around an 80% pass rate.

*humble brag, passing the CFP® exam took me less than one year! *

The CFA (Chartered Financial Analyst) is another legitimate designation that is incredibly difficult to attain, which makes it a top candidate for being knocked-off.

Becoming a CFA has a three-level exam process, which takes -on average- four years to complete. Applicants must have four years of qualified work experience in investment decision making.

John then goes on to talk about how the production company that produces his show contacted a broker in an attempt to set up a 401(k) for the staff of Last Week Tonight.  John talks about the bad experience they with a broker, and then he drives home how easy it is to become a “Financial Adviser” is a very funny way….

“….And that {our financial advisor} did a lot of things for us like acting as our “Financial Adviser”, Although, as we now know, that term doesn’t necessarily mean much.  In fact, if you go to our website right now you can print out a free “Official Financial Adviser Certificate”, and there you go! Congratulations! You are one too! Well done!”

This episode of This Week Tonight really is the gift that keeps on giving.  I’ve attempted to find guests for this podcast to come on and give an unbiased opinion on the commission vs. fee debate. The manner in which a client compensates his/her financial planner has been debated for the better part of a decade.   Again, I have had a tough time discussing the topic in an entertaining and non-biased way, and John knocks it out of the park in this next clip…

“But even many well credentialed financial advisors are paid on commission, so if they recommend something for you, it may be because they stand to make money. In fact, sometimes they’re actively incentivized not to act in your best interest. Take annuities; certain types of those {annuities} can be very complicated investment products that can have high fees and would only be appropriate for certain types of portfolios, but, some financial advisors push them hard. …and brokers pushing annuities may not just be getting money. Last year, Elizabeth Warren released a report on sales perks in the annuity industry, ranging from free cruises, to luxury watches, to -and this is true- this tacky Super Bowl-style ring, which is absolutely ghastly, but I guess it makes it easy to spot brokers that you shouldn’t work with.”

I wish this weren’t true of my industry, but it is. Your financial advisor is able to manipulate his/her compensation based on the particular products recommended, and the client has no way of knowing.  The new Department of Labor regulations go a long way to change this, and I’m thankful for that.  I want you to think about what John said about the luxury incentives provided for financial advisors.

Picture this: You retire in December; you have your previous employer’s 401(k) that you want to roll into your IRA to be managed by your financial advisor. Let’s say your advisor is on the cusp of an all-expenses paid trip to Australia, but he is a few sales credits short. Will he sell you a variable annuity in order to qualify for the trip? Will he recommend a different, less expensive product that might be more appropriate, but won’t qualify him for the trip?

Will you even know the difference?

Well, as of right now, if you aren’t working with a fiduciary, you wouldn’t know the difference – and he wouldn’t even have to disclose the Australian vacation, or the Super-Bowl ring as a conflict of interest.

Let’s go back to John…

“Now generally, it is currently legal for financial advisers to put their own interests ahead of yours, unless -and this is interesting- they are what’s called a “fiduciary”. Because not all financial advisers are bound to act in your best interest, but fiduciaries are.  Which is a bit weird.”

A bit weird is a bit of an understatement. Financial advisor compensation continues to baffle me, even after almost a decade in the industry.  Conflicted advisors can recommend an investment or insurance product that pays them a huge up-front commission. Once the commission is received that advisor has no incentive to even talk to you again. That is, until it is time to sell you another financial product.

The new Department of Labor rules will go a long way to bring transparency and fairness to financial advice, but the new rule stopped short of making commission selling illegal.  Through the threat of class-action law suits, I think we will see the majority of the most heinous financial products disappear, and we will see more financial advisors become fiduciaries.

“Back in April, the Department of Labor issued a final rule requiring that all advisers handling retirement accounts act as fiduciaries, beginning next year, and that is great, because the financial services industry fought this rule hard….and while the rule has gone through anyway, five lawsuits have been filed by financial services groups attacking it and legislators in the House and Senate have passed a resolution trying to overturn the Fiduciary Rule. Although, just a few days ago, the President did veto it.”

John caps off the episode with some commentary on the passive vs active investment management debate.

“Generally speaking, you can choose between low-fee index funds, which basically just try to match the average returns of the stock market, or for a higher fee, you can get an actively managed fund, with experts who will pick and choose stocks for you, trying to beat the market….but the problem with active management is that even many Wall Street experts find it difficult to consistently beat the market and there is sometimes embarrassing evidence of this, like when a group of professionals were pitted in a stock-picking challenge against a cat named Orlando.”

This is true, something like 80% of active managers fail to beat their benchmarks on any given year.  I don’t consider myself a staunch ideologue against active management, I’m just not confident in anyone’s ability to forecast the future.  My preference for passive management is the simple issue of cost. My practice deals with people living off their savings, if we use an index fund in the place of an active one, and save the client some money in the process, that money can be spent on their retirement. Isn’t that why they saved the money in the first place?

I’d like to thank John Oliver and the team behind Last Week Tonight for covering this important issue.  Hat’s off to them, they made discussing the fiduciary standard, conflicted advice, and passive vs active investing interesting, and I think I would have continued to struggle to find a way to talk about it without them. 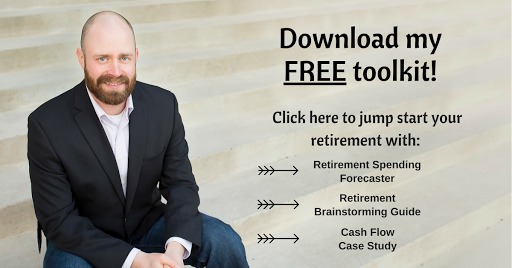 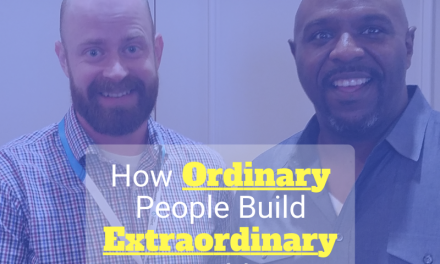 Chris Hogan: How Ordinary People Built Extraordinary Wealth – and How You Can Too 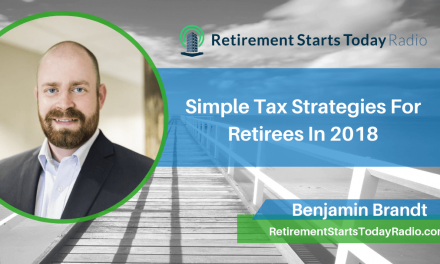 Simple Tax Strategies For Retirees In 2018 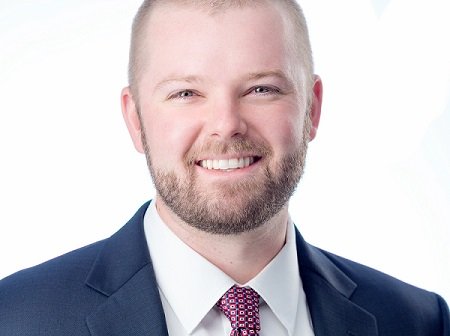 Does the 4% Rule Still Hold Water? 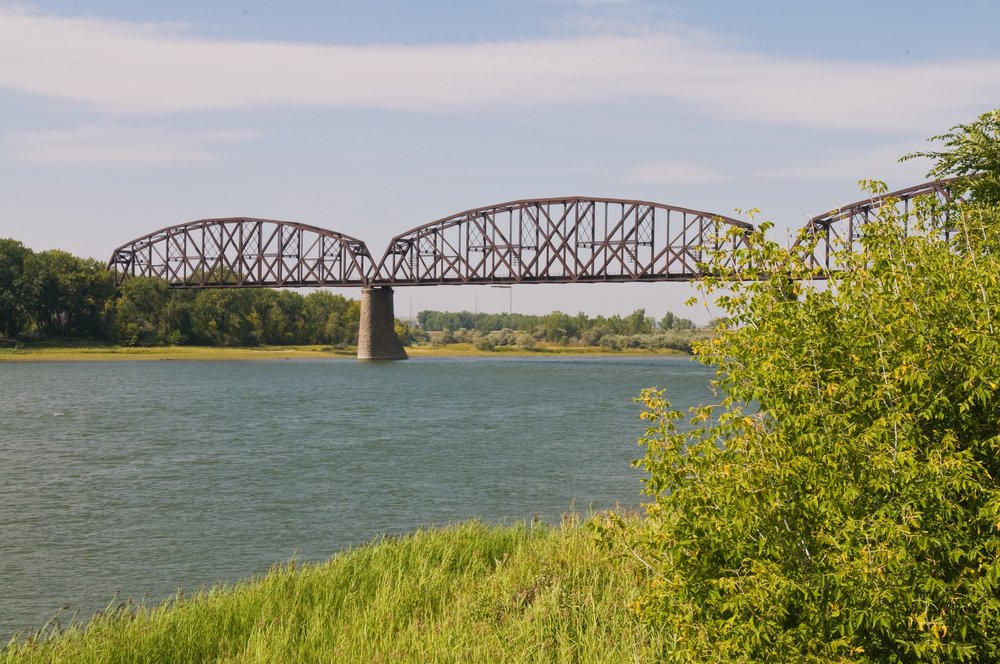